At the age of 5, he started playing football at the school of the local club Dynamo, then continued his trainings at Molnia. At the age of 12, he practiced a little at the Konoplev Academy in Togliatti, from where he then moved to Amkar Perm FC, where for 5 years he trained with both youth and the main team of the club.

In the 2011/12 season, Paderin changes two teams at once: first the Krasnodar Kuban FC, and then the Permian Amkar. In 2012, the footballer joins the Tyumen FC, having played 10 matches there, Paderin in 2014 transferred to the Sochi Football Club. And in 2015, the midfielder moved to Armavir FC, where he spends the longest and most successful period of his career for 5 seasons. And in the 2017/18 season as part of the team, he becomes the champion of Russia of the Second Division of the South Zone.

During the 2020 winter transfer window, Paderin moves to Urartu Yerevan FC, but six months later he ends his football career ahead of schedule. Exactly half a season later, Igor Paderin decides to resume his career as a professional footballer and returns to Urartu FC. 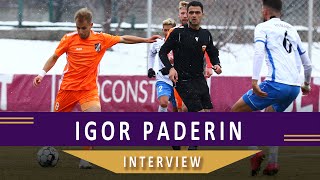