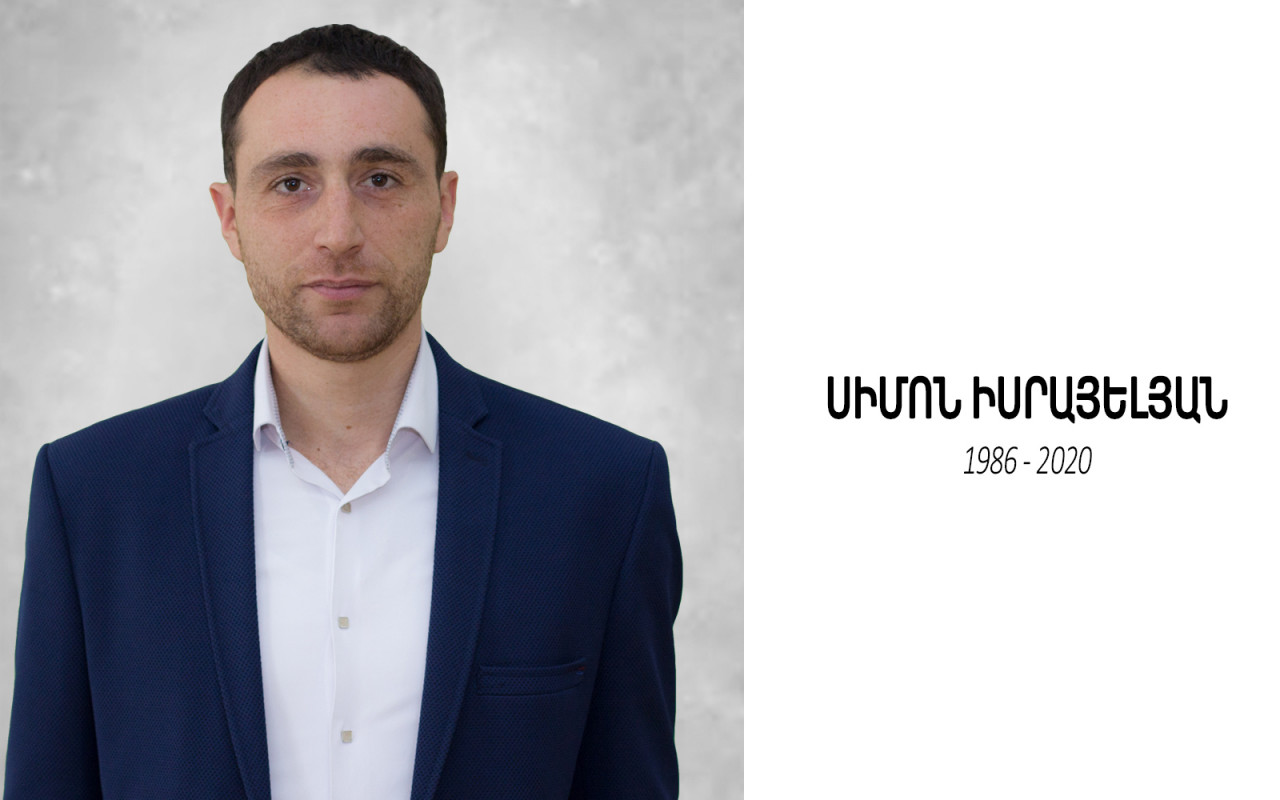 Hero of the 44-day Artsakh war awarded with the Medal of Valor, and a long-time employee of Urartu FC.

Simon Israyelyan was born on March 9, 1986, in Yerevan. He attended school N191 named after Davit Hovsepyan, and from the 5th grade, he continued his education at the Yerevan State Sports College of Olympic Reserve. From an early age, Simon had a great passion for sports and attended track and field trainings. Simon was a sprinter. His love for sports was a decisive factor in choosing his path. Simon was admitted to the Armenian State Institute of Physical Culture, Faculty of Athletics. From 2007 to 2009, Israyelyan served in the army and was discharged with the rank of lieutenant. After returning from the army, he worked as an athletics coach at Spartak sports complex. 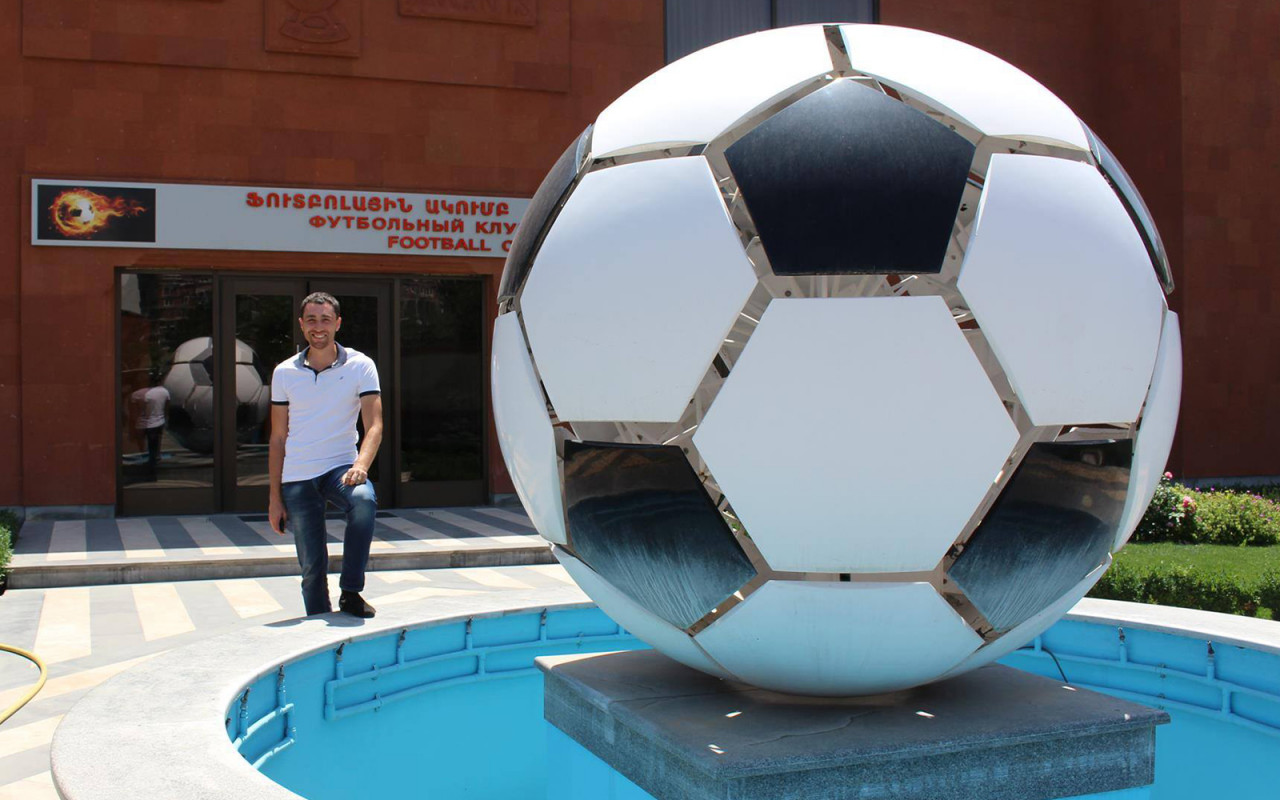 Since January 2014, he has worked at Banants FC as a manager and sports camp administrator. Simon Israyelyan also worked as a physical education teacher in "Hekiat" kindergarten.

After getting the bad news about the start of the 44-day war, Simon was one of the first members of Urartu FC to rush to the front. Simon took the road to Artsakh on September 29. The army reserve lieutenant heroically fought against the relentless enemy until October 10.

For a long time, there was no information about his location. The body of Simon Israyelyan was found only in December 2020 and was identified in February 2021. The entire staff of Urartu FC participated in the funeral ceremony. It happened that on the day of the funeral, February 5, Urartu FC played a friendly match with Alashkert FC. In that match, the players of Urartu FC came to the field wearing jerseys with the image of Simon Israyelyan. The game started with a one-minute silence. 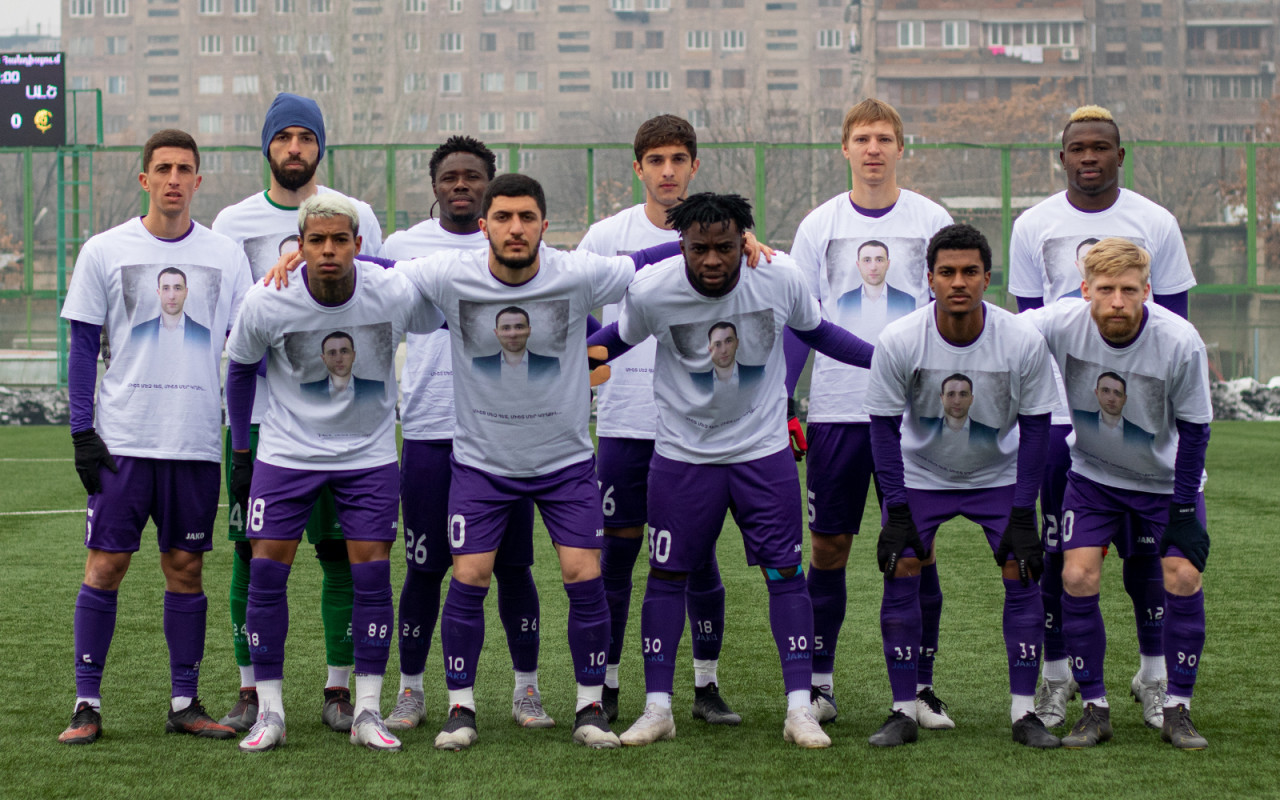 James Santos, who scored the only and the winning goal of Urartu FC, crossed himself after the goal and put his hands up to the sky. After the game, Santos wrote the following on his Instagram page: "I dedicate the goal I scored to my friend who heroically died defending his homeland. Rest in peace, my friend." Later, Santos gave his jersey of that game to Simon Israyelyan's family. 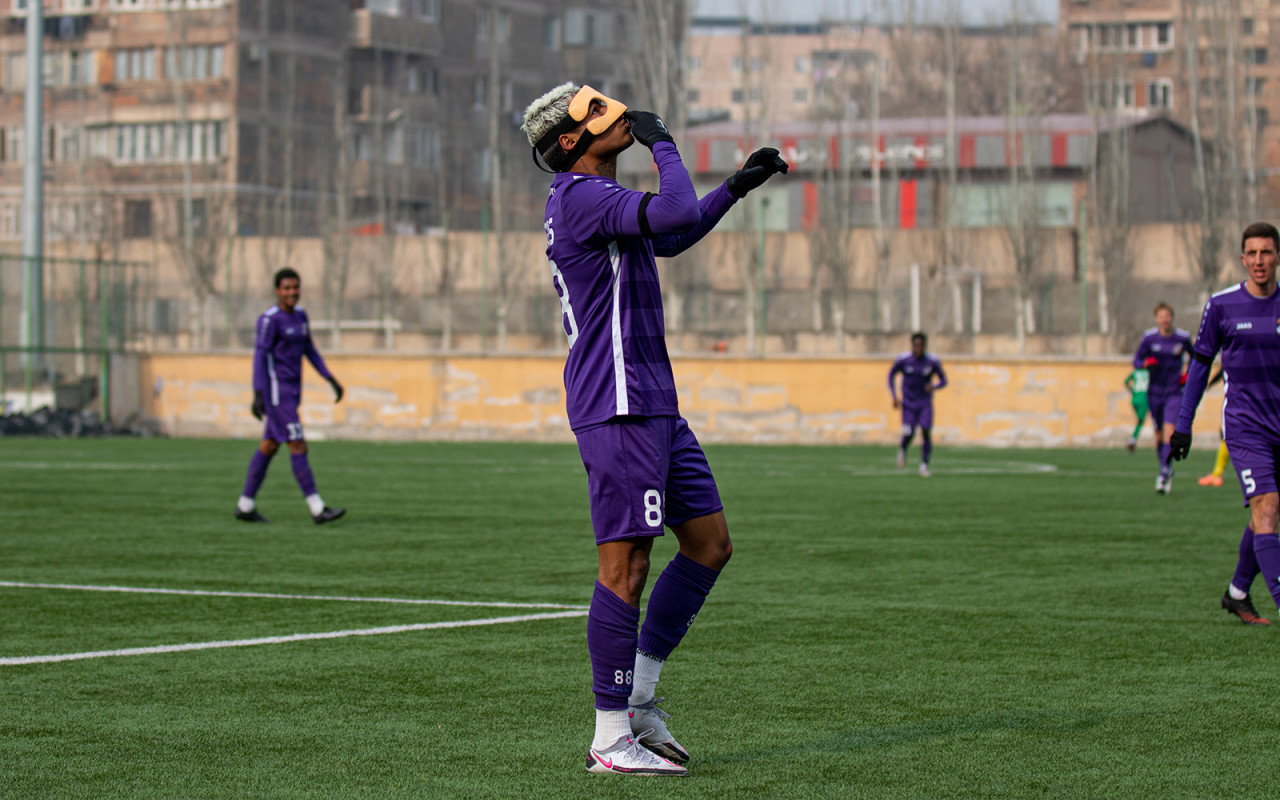 For his courage and bravery in defending the state border of the Artsakh Republic during the 44-day Artsakh war, Simon Israyelyan was posthumously awarded the Medal of Valor by Decree N663-A, 2021 of President of the Republic of Artsakh Arayik Harutyunyan.

The 44-day Artsakh war did not interrupt the connection between Simon Israyelyan and Urartu FC. Simon's son, Spartak Israyelyan, started attending the academy of Urartu FC in April 2021. 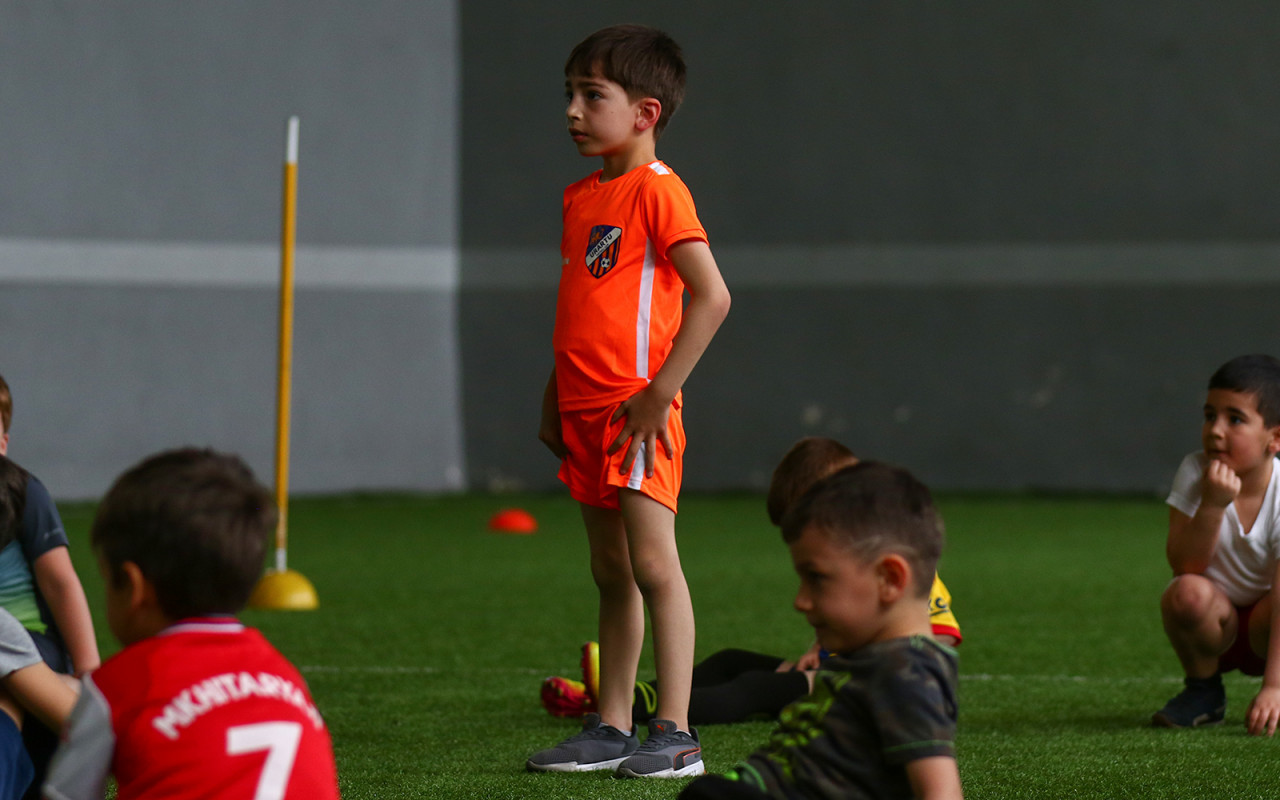 Simon Israyelyan's birthday has become symbolic for the whole football club. On that day, employees of Urartu FC and football players of the youth teams visit Yerablur Military Pantheon and pay tribute to Simon Israyelyan. They also lay flowers at his bust located in Urartu FC training ground.

It is worth mentioning that on September 7, 2021, the opening ceremony of statuary took place at the training ground of Urartu FC. Along with the sculptures of legendary football players Hovhannes Zanazanyan, and Arkadi Andriasyan, as well as the founder-director of the football school, Edvard Grigoryan, the bust of Simon Israyelyan, hero of the 44-day Artsakh war and a longtime employee of Urartu FC, was also installed. 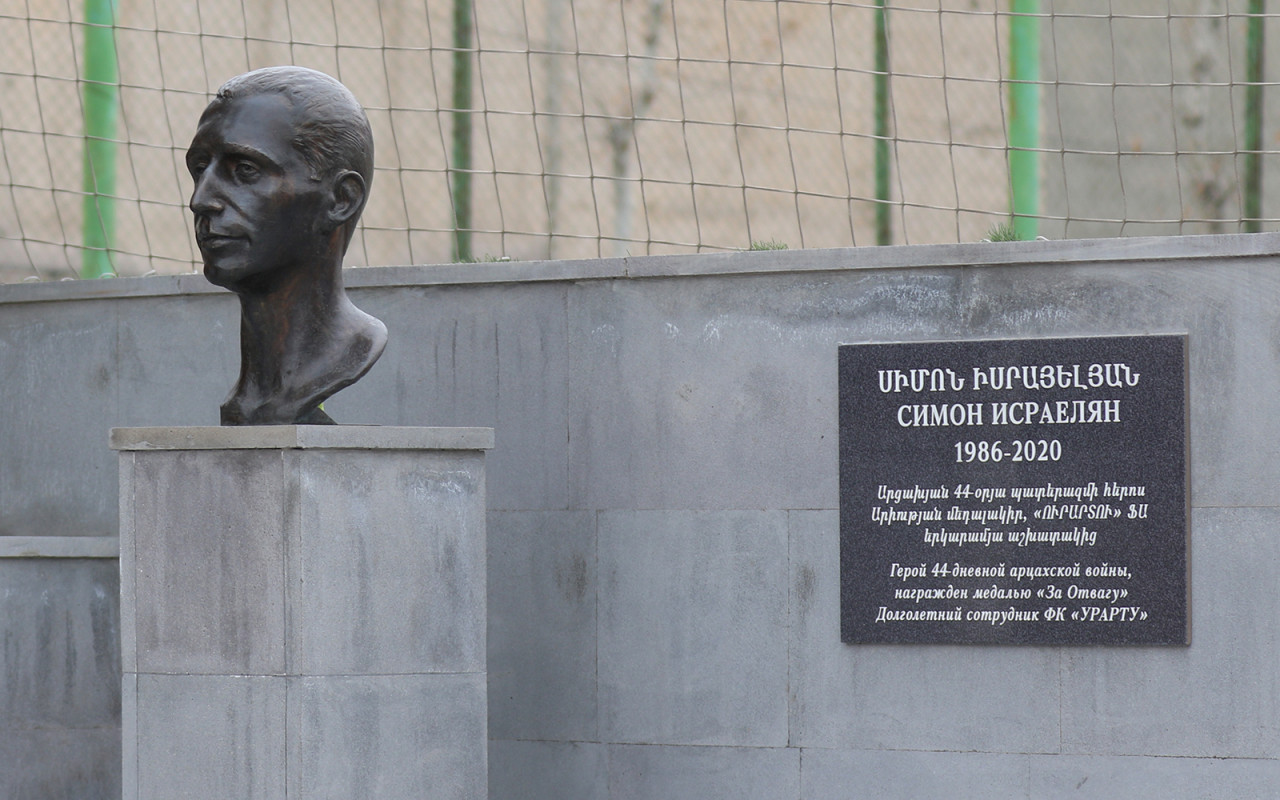 The relatives of Simon Israyelyan were present at the opening ceremony. The RA former Minister of Defense Seyran Ohanyan, who was also present at the event, made a speech.

"It is a great honor for me to be present at this beautiful event today. Next to the legendary players, we also unveil the bust of Simon Israyelyan, a person who made a great contribution during the 44-day Artsakh war, and dedicated his life to our peaceful being. Today, Armenians are in a very difficult situation, but the only way out of it is people's dedication to their work, professionalism, and dignity. I thank the employees of Urartu FC and all those who honor the great path of our football and the heroes who perpetuate the history and the path taken by the Armenian people," he said.

WHEN TALKING ABOUT SIMON, THE WORD “HERO” IS WORTH USING

During the 44-day Artsakh war, Captain Gevorg Hovhannisyan was the commander of the military unit that reserve army lieutenant Simon Israyelyan had joined. In a conversation with us, Hovhannisyan told how the long-time employee of Urartu FC behaved on the frontline. 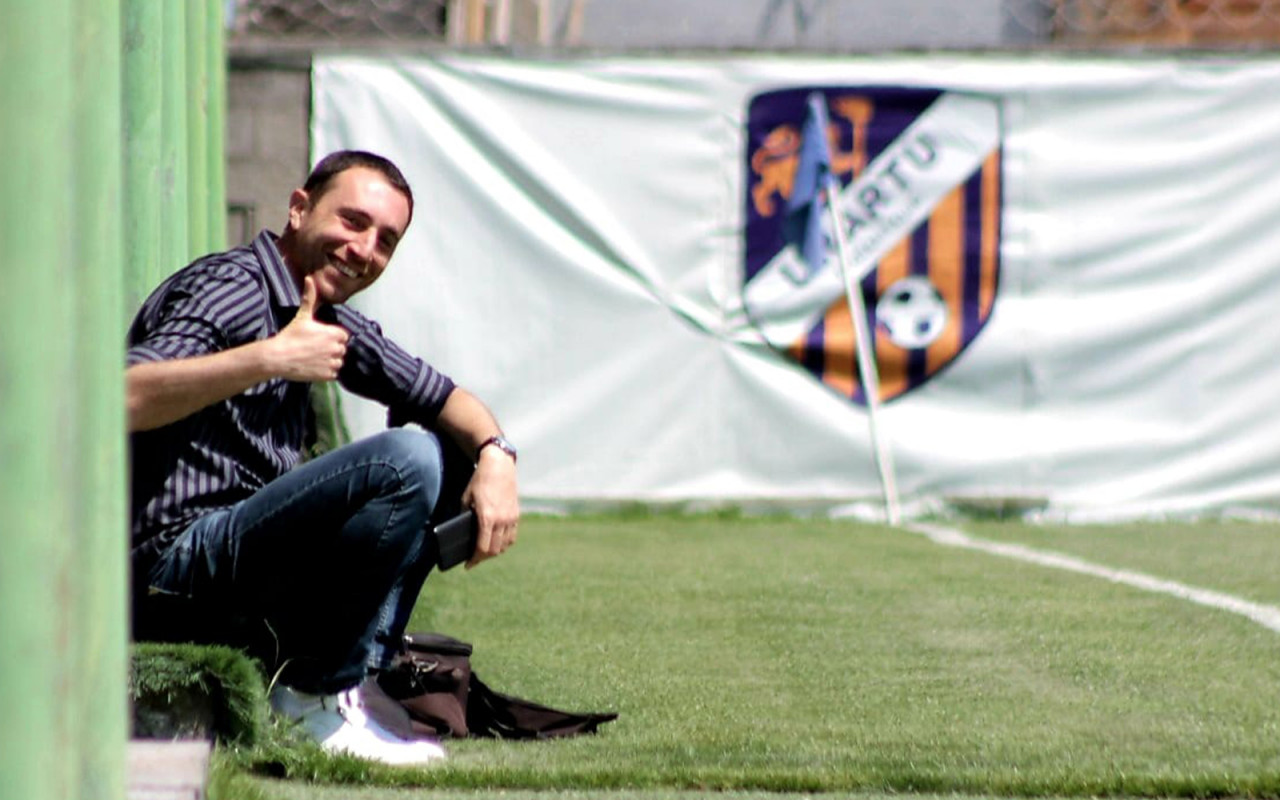 "Simon Israyelyan was a very balanced, modest, and intelligent person. Unfortunately, I didn't communicate with him much, but I managed to understand all that. He was a lieutenant, that's why during the war he was entrusted with the position of the platoon commander, and he very easily began to perform the tasks assigned to him. It is clear that there are many difficulties and inconveniences on the battlefield, but he never complained about anything and faced the difficulties like a real man.

In a short period of time, he got along with everyone very easily. It was like we had known each other for a long time. He was able to find the right ways to communicate with people, that's why the soldiers got on well with him very quickly. It is clear that he was older than the soliders, but he said that everyone there was like a younger brother to him, and those were not just words as he did everything for them in that short period of time.

October 10 was a very cruel day and that is perhaps the mildest word to describe the given situation. On October 10, we were in the section from Mount Ara to Hadrut. We got a task to occupy another borderline. The enemy was preparing for an attack in that area, and our task was to prevent their advance, but we were detected by drones that had started working in our direction. We had not yet managed to fully position ourselves and we were subjected to shelling. We had a large number of victims and wounded. Simon was also among the victims…

His death was a big loss for us, even though we had only known each other for 11-12 days. Simon left us good memories. If it wasn't for all this and they told me that it is possible for a person to be able to immediately adapt to a war situation from civilian life, taking the responsibilities of a commander with subordinates and receiving such respect, I would not believe it. After telling Simon's story, though, I realize that all that is reality.

Simon, his subordinates, and our other boys also fought heroically, they were in their positions until their last breath... When talking about Simon and other guys like him, the word HERO is worth using.”

WHAT CLOSE PEOPLE TELL ABOUT SIMON

"He was a really special person. Those who knew him, would never assume that he is so strong. He was a sports person and liked to exercise. Urartu FC was his home. He was very calm, without emotional outbursts. There was nothing evil about him. Simon never liked when we were sad, so now, when I get emotional from time to time, I remember him and realize that he would not like that. In such cases, he would do everything to make us happy."

"I can't find a single person who has nothing but positive things to say about Simon. Perhaps there is no such person. Whatever he did, was with great dedication, heart, and soul. He was special. I am not saying this because he is my son. I have interacted with a lot of people, but he was different. He would never get tired. He used to come home and immediately rush to Urartu FC after the first call, to solve the problems. For him, there were no working hours, no days off... He was available to everyone, 24 hours a day. It was like that in kindergarten [ where he used to work] as well. Every time he entered the kindergarten, the children came and hugged him, wrapping themselves around his legs."

"It was September 2015. The secretary approached me and said that there is a guy who wants to talk to me. It was Simon. I did not know him. Simon approached and said that he once worked in Urartu FC, but because of disagreements over some issues, he quit the job. He wanted to return. From the very first meeting, I felt positive energy from him. He was also greatly devoting himself to the work. Later, we talked many times about the right decision we had made to hire him again. One could wonder how he treated his work, and how he loved his job, regardless of his position. If everyone is as dedicated to their spheres as Simon, we will have a very powerful country.

He was very passionate about his work. Now Simon's son, Spartak, is playing in one of our club's youth teams. We want to see Simon in him, to rejoice in his success. If Spartak has his father's diligence and dedication, I am sure that he will succeed in every aspect of life, because one cannot love his work that much and not succeed."

"When I lived in the training ground, I often drank tea with Simon in the evening. I listened to Simon, looked at him, and thought how good it would be if the majority of the new generation of the Armenian people were like him, what a powerful state we would have. When we use the term "hero", we usually have a different perception, but Simon's human qualities, his kindness, balance, modesty, and courage are the characteristics of a modern-day hero.”

Simon Israyelyan went to the front on September 29. Two years later, on the same day, Urartu FC had a local match with Noah FC (0-1) within the framework of the 8th round of the Vbet Armenian Premier League. The match started with a minute of silence, and the players of Urartu FC entered the field wearing jerseys with the image of Simon Israyelyan. 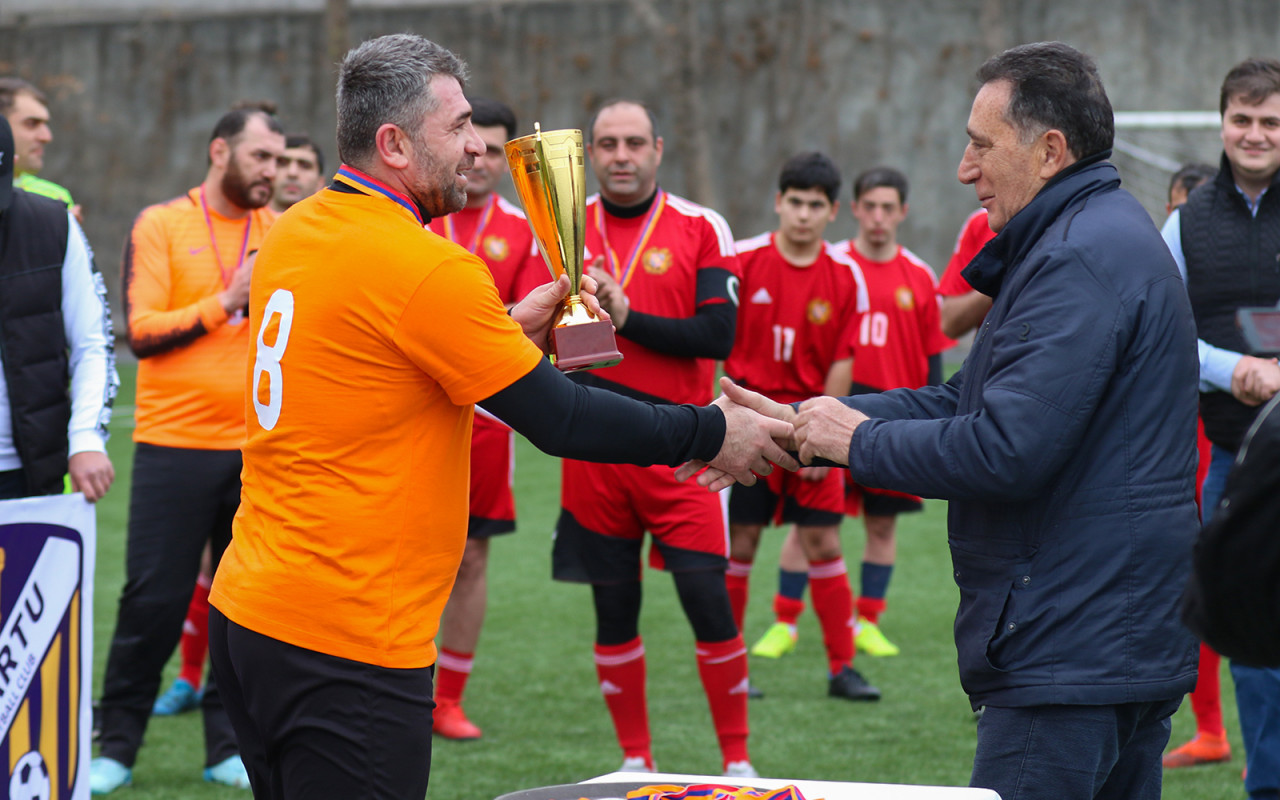 It is planned that this tournament will become something regular, as well as a tournament named after Simon Israyelyan is to be held among youth teams. It is worth mentioning that on the same day, within the framework of the 22nd round of the Vbet Armenian Premier League, Urartu FC had a home match with Alashkert FC (0-0). Before the start of that match, the players of Urartu FC took a photo near the poster with the image of Simon Israyelyan, on which it was written: "Simon Israyelyan, forever with us and in our hearts."