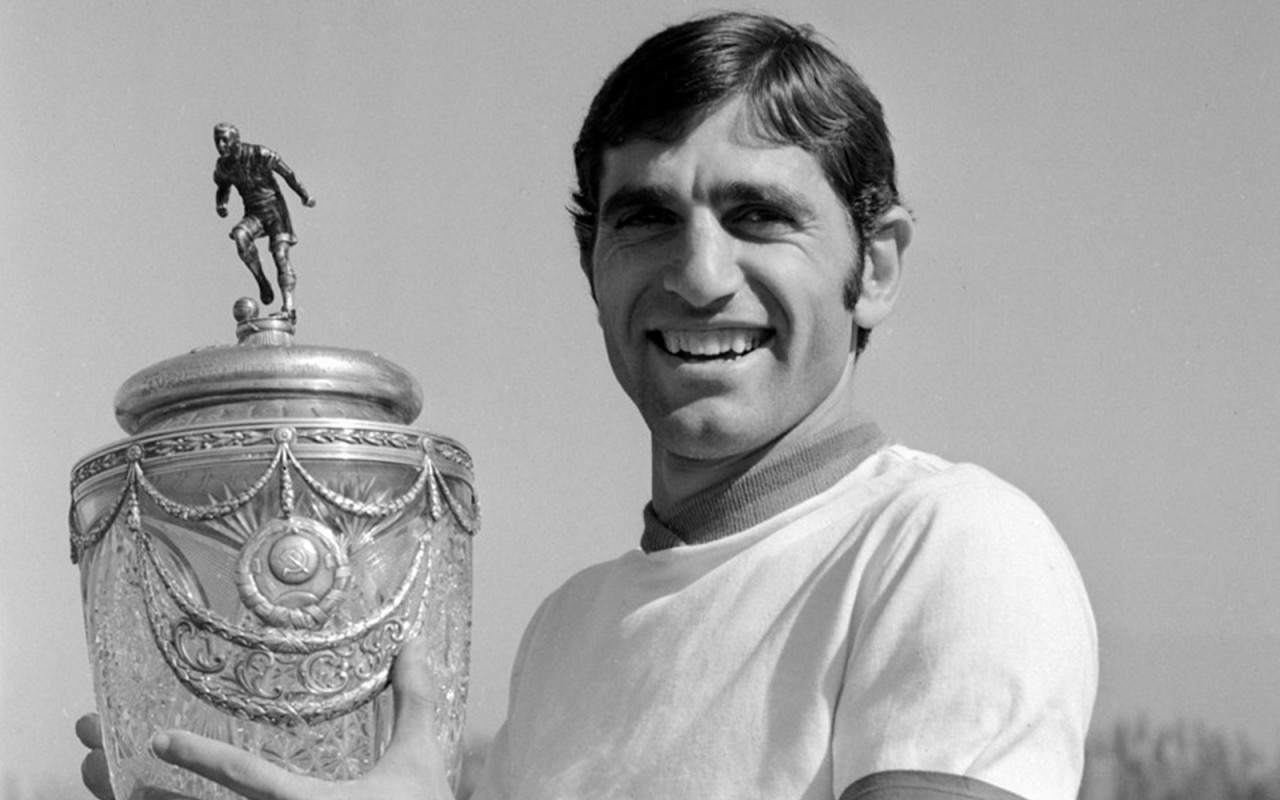 Hovhannes Zanazanyan was born on December 10, 1946, in Athens. Zanazanyan's father was also a football player and used to play in Apollon FC. After returning to Armenia, Hovhannes, along with his brother Levon, started attending the youth school of Spartak Yerevan. His first coach was Kajair Poladyan. 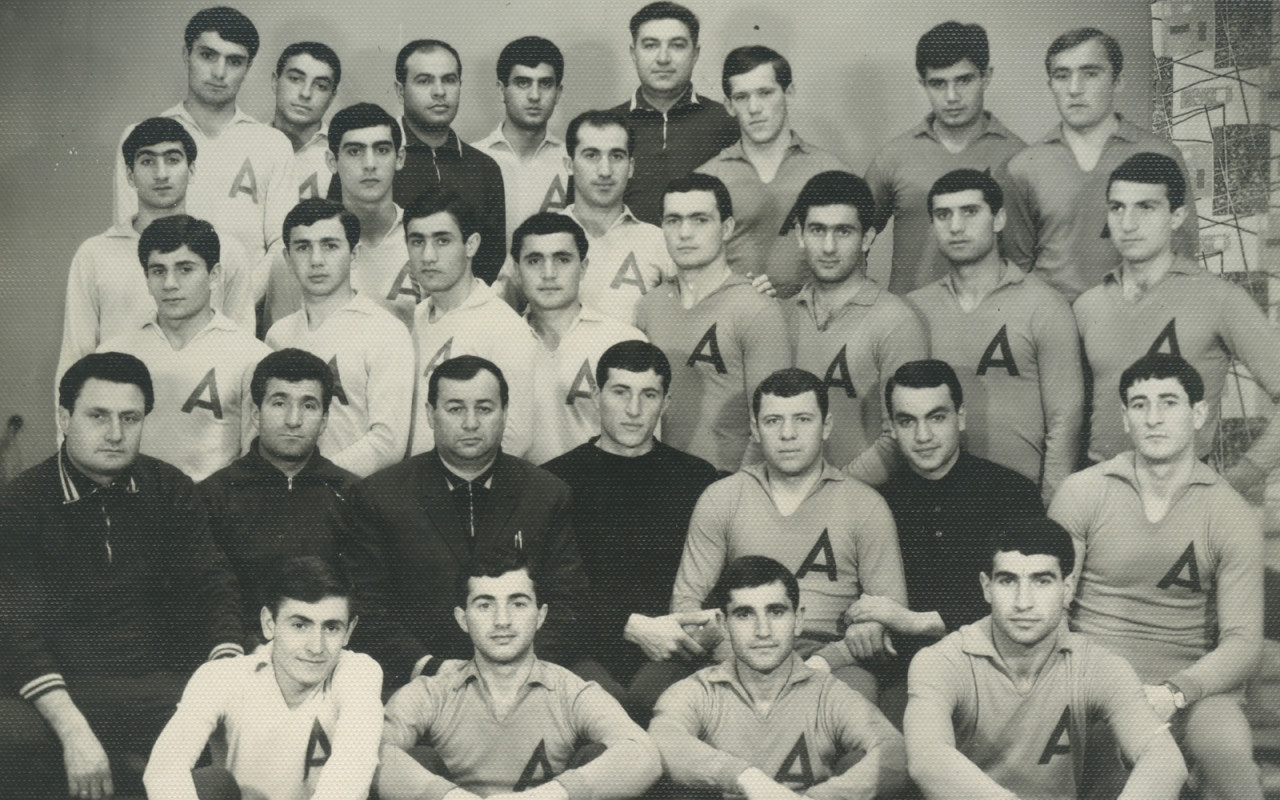 Hovhannes Zanazanyan played for Ararat FC until 1975. During that time, he became the silver medalist of the USSR Championship in 1971, and in 1973, the USSR champion and cup winner.

He has had 247 matches and scored 56 goals in the Top league of the USSR (243 appearances and 56 goals for Ararat). He has taken part in 11 fixtures of European Cups (6 European Champions Cup, 5 UEFA Cup), and has scored 3 goals. 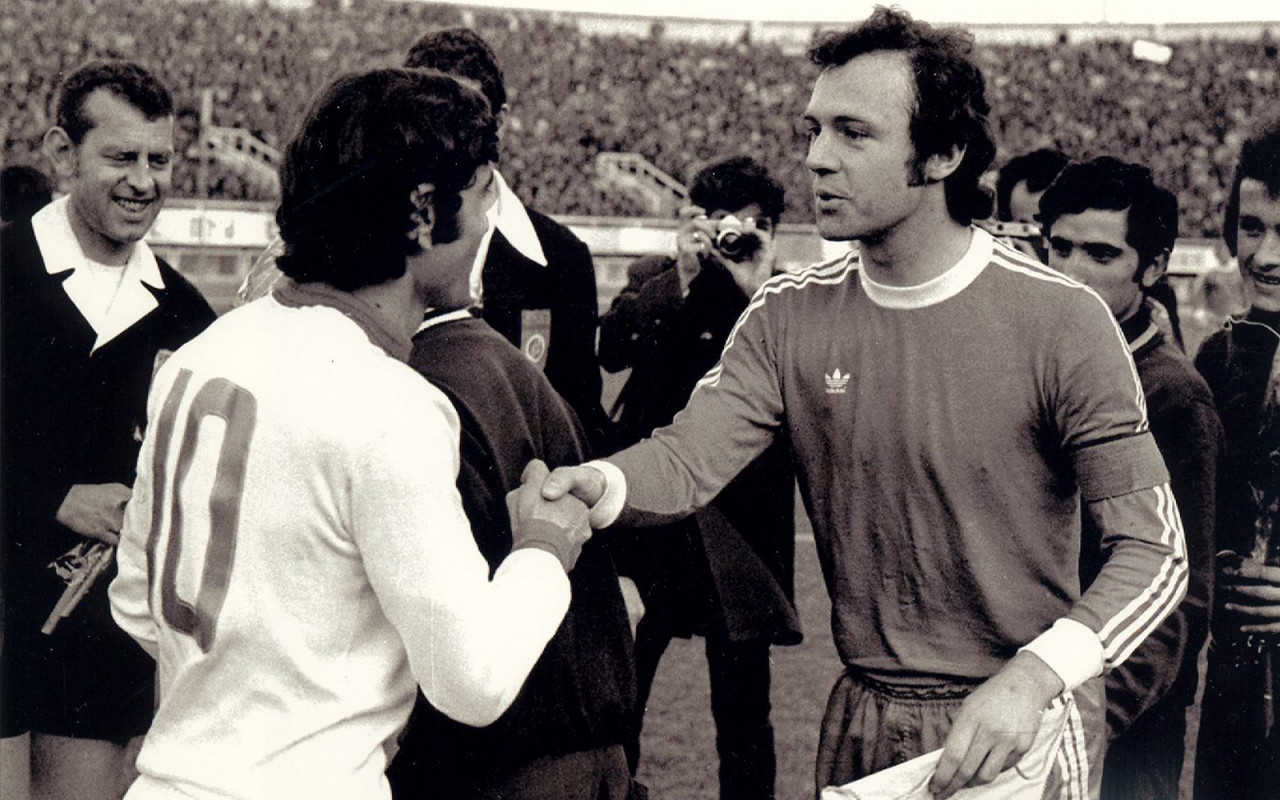 March 19, 1975,  Ararat (Yerevan) - Bayern (Munich). The captains of the teams, Hovhannes Zanazanyan and Franz Beckenbauer greet each other before the match

"When Hovan was next to us, we couldn't be lazy. With his energy and boundless dedication to the game, he was able to force us to give ourselves completely to the match."

"With Hovhannes Zanazanyan we played in Shirak, and in 1966 Artyom Falyan invited me, him and Norayr Demirchyan, to Ararat. In 1967, I moved to Spartak Hoktemberyan, and in 1969 I came to Ararat FC for the second time. We were choosing a captain for the team. At that time we were all young and were almost the same age. There was an election and we chose Hovan as the captain of the team. As a football player, Zanazanyan was extremely hardworking, had great willpower, was capable of strong shots with both feet, and made long and accurate passes.

A powerful midfield trio was formed in Ararat - Zanazanyan, Andriasyan, and Bondarenko. At that time, Zanazanyan, Bondarenko, and I were thinking that we should score 7-8 goals in each season, and that's what happened later. 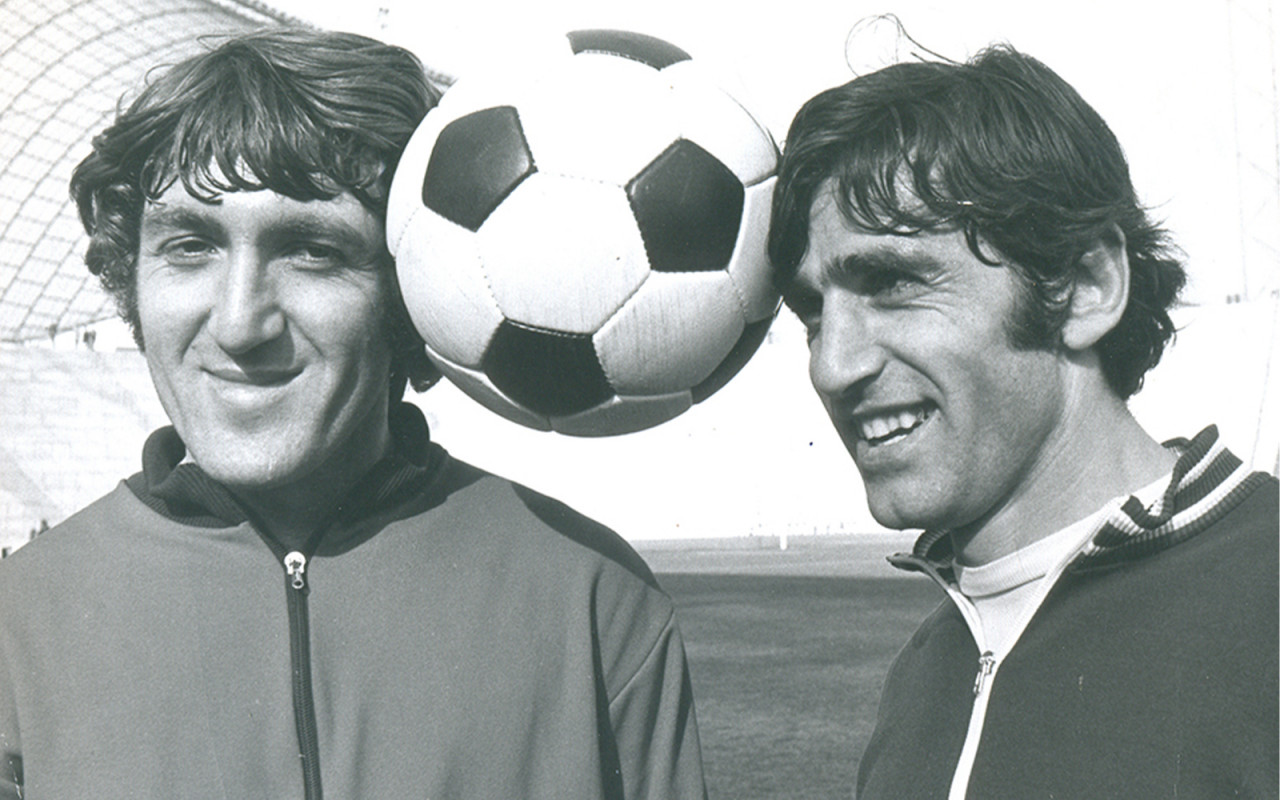 Hovan and Bondarenko mainly shoot from long distances. I also stood out from a distance once in a while, but I jumped forward more and scored from close range. Such diversity made it difficult for the opponent to defend. It was on the basis of a good midfield that our team started to become stronger. Hovan had a great reputation in the team, he was able to make the players prepare well for the matches. When we started playing together, we believed in each other and strived to achieve success."

"Any high-class team must have an outstanding leader who will guide his teammates. So was Hovhannes Zanazanyan. Of course, there were such virtuosos in Ararat-73 as Eduard Markarov, Arkadi Andriasyan, Alexander Kovalenko, Norayr Mesropyan, Alyosha Abrahamyan, Sergei Bondarenko, Levon Ishtoyan, Nikolay Ghazaryan. In short - all of them. Still, Hovhannes Zanazanyan was a real leader among them.  His word reached everyone. His role was very big in Ararat. I am grateful to Hovan for our effective work. He has done a lot for Ararat and Armenian football in general. I bow to him and all the players of Ararat-73.”

"During the final of the USSR Cup, Zanazanyan went on the pitch with an untreated injury of both legs, and with an injection. Before the match, when the team's doctor Aram Yusupyan brought up the question about Zanazanyan's possible participation in the match, Hovhannes himself firmly declared that he will play in any situation."

"Many coaches would dream of having a player like Zanazanyan in their team. If they asked me to choose only one player from Ararat, I would choose Zanazanyan. He may be inferior to Eduard Markarov and Arkadi Andriasyan in terms of his individual qualities, but he is an irreplaceable player with his energy, unwavering devotion to the competition, and his ability to spread his combative character to his teammates."

"I always tried to be simple. For that, I am thankful to my parents and my first coaches. I bow to them. I had wonderful coaches like Kajair Poladyan, Ghazaros Teknedjian, and Onik Abrahamyan, who were demanding professionals and there could be no room for selfishness and arrogance in my young soul. For them, work and dedication to it, was the most crucial part of football. All that was passed on to me and my peers. So, when I joined their professional team, I was already psychologically ready. I am grateful to my destiny."

“Ararat was really a team of celebrities, where the individual and great performance skills of each player and the collective-combination game were wonderfully harmonized. These are exactly the qualities with which the leading teams of Europe shine today: Real Madrid, Chelsea, Barcelona, Milan, Olympique Lyonnais...

"The players of Ararat were chosen, the coach Artyom Falyan had chosen them one by one. It was he who made a revolution in Armenian football. He saw future talents among the 17-19-year-old boys - me, Andriasyan, Ishtoyan, Demirchyan, Ghazaryan, and others. Kovalenko joined us as already an experienced player, and Markarov moved from Neftchi to Ararat at the right time".

"Regardless of their educational level, all of the boys were gifted with intelligence and outstanding skills, and the coaches developed and brought all of that to a high level. I want to emphasize their intellectual abilities. The boys had perfect technique, and we were tactically trained by the best coaches of the Soviet times, who took over the management of Ararat". 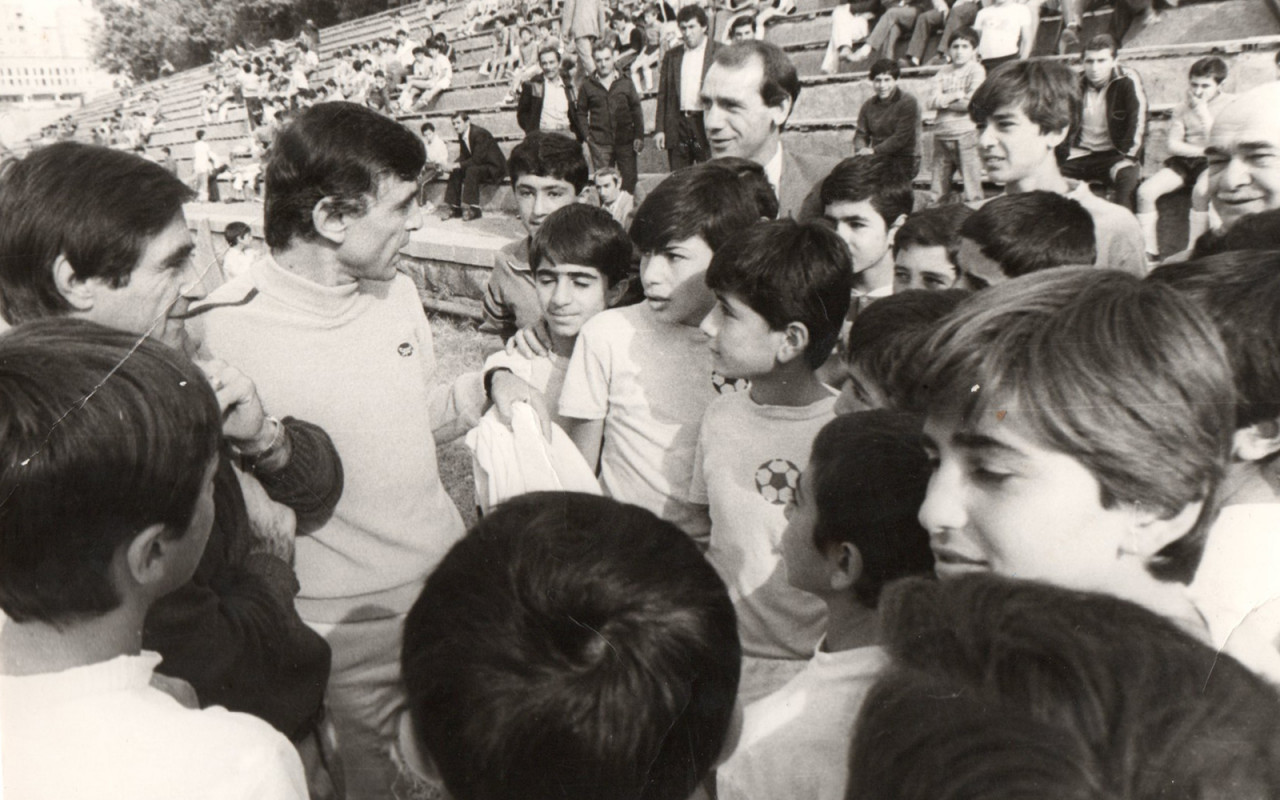 "Each of the players was an individual, one was not like the other, both in terms of personality traits and playing qualities. We were physically, technically, and, first of all, psychologically ready to implement the tactical ideas of each of our coaches (Falyan, Ponomaryov, Glebov, Simonyan, Maslov) on the pitch."

“Each of the players in Ararat was a star and had the right to be the captain of the team, but since they chose me, they not only put a huge responsibility on my shoulders but also great moral rights. My teammates trusted and respected me unconditionally. Of course, the captain of the team must have high human qualities and playing skills, especially the ability to lead the team in difficult moments."

"I was happy to go to Karabakh. During the first match with my participation, 15 thousand people gathered in the stands of the beautiful Stepanakert stadium. Besides young boys and girls, even 80-90-year-old people came with their great-grandchildren. They would hug and kiss me, give me their blessing. It was something indescribable, you had to see it with your own eyes. I was just shocked. For the first time, I deeply felt that they have an infinite longing for their mother Armenia. In short, in such an atmosphere, I had to play as I did in my best years. I had no right to let those people down. I scored a lot of goals. In short, I lived up to the expectations. They even gave me the only brand new "GAZ-24" car assigned to the region. In fact, it was the 3 of us claiming for that car, including the director of the Chartar collective farm, the Hero of Socialist Labour, Suren Adamyan, who was a very respected and famous person and another hero, which, I think, was from Hadrut, I don't remember his last name."

"I returned to football thanks to Sargis Israelyan, the president of Banants FC (currently Urartu FC). I am grateful to him. I see his serious plans and strive to support their implementation. He intends to create a super football club. It is a difficult task, but not an impossible one. The path has been chosen correctly, the training ground is excellent, the selection of football players needs to be made more strictly, and we have promising young people who should be treated with care and there’s no doubt that after a few years the expected result will be there. I wish success to our entire Armenian football."

Hovhannes Zanazanyan was invited to Banants FC (currently Urartu FC) by the president of the club, Sargis Israelyan. The legendary football player started working in this club on January 20, 2003, first as a vice-president, and then for a short period as a head coach. 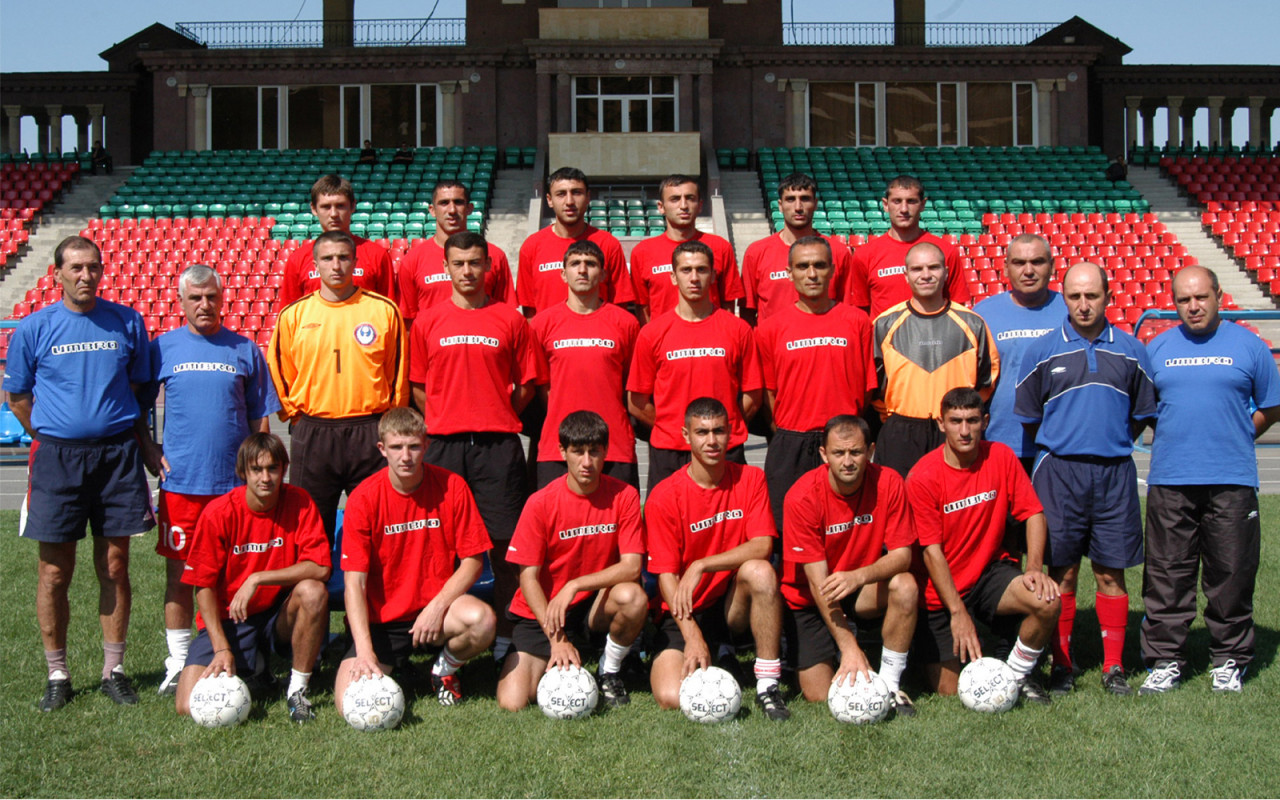 Banants, 2003. Hovhannes Zanazanyan is the second from the left in the second row

As the vice-president of the club, Zanazanyan began to implement the general management of the football school, to work on the school's problems and the development strategy together with the club's managing staff. On January 8, 2013, he took the position of the coaching council chairman of Banants FC NGO’s children's football school. Zanazanyan worked in Urartu FC until July 1, 2013.

On December 10, 2006, Banants FC (currently Urartu FC) organized a ceremony dedicated to Hovhannes Zanazanyan's 60th anniversary in the small hall of philharmonic named after Arno Babajanyan. People's Artist of the USSR and Armenia Sos Sargsyan, People's Artist of the Republic Azat Gasparyan, Ararat-73 coach Harutyun Keheyan, the president of Banants FC Sargis Israelyan, sports commentator Suren Baghdasaryan made speeches about Hovhannes Zanazanyan. During the dinner organized at the end of the event, Hovik Abrahamyan, the Minister of Territorial Administration of that time, read the congratulatory message of RA Prime Minister Andranik Margaryan and handed over a gold medal. Serzh Sargsyan, Minister of Defense of the Republic of Armenia at that time, also made a congratulatory speech. 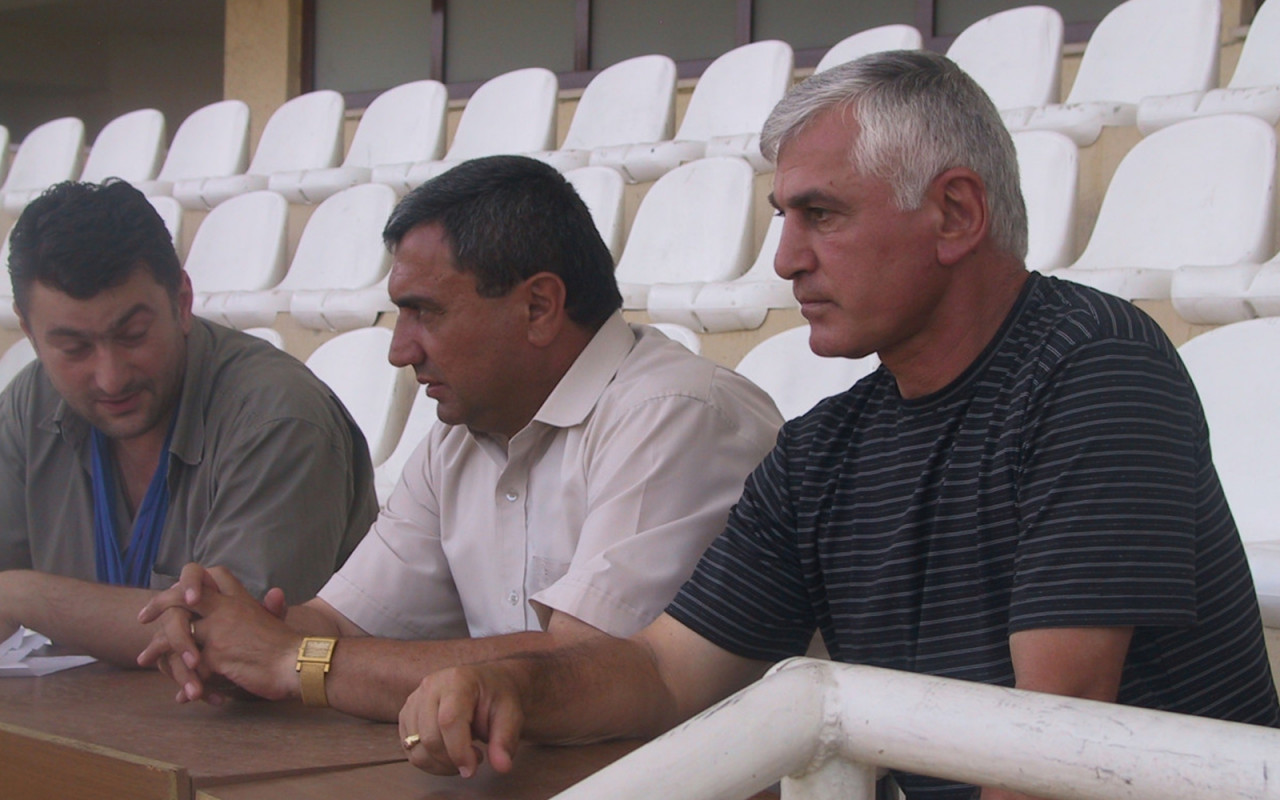 On August 6, 2016, the unveiling of Hovhannes Zanazanyan's statue took place in the training groud of Urartu FC. The co-owners of Banants FC (currently Urartu FC) Dzhevan Cheloyants and Oleg Mkrtchan, the FFA president Ruben Hayrapetyan, legendary football players of Ararat-73 Eduard Markarov, Alyosha Abrahamyan, Sergey Poghosyan, and other notable people were present at the event honoring the famous football player. The author of the statue is Mher Mnatsakanyan. It was symbolic that Banants FC and Ararat FC competed with each other in the first round of the 25th Championship of the Armenian Premier League, which started on that very day. Those were the teams with which the legendary Zanazanyan's name is associated. It is even more remarkable that Laércio scored the only goal of the match from Banants FC. The Brazilian forward played for Banants with Zanazanyan's jersey number 10. 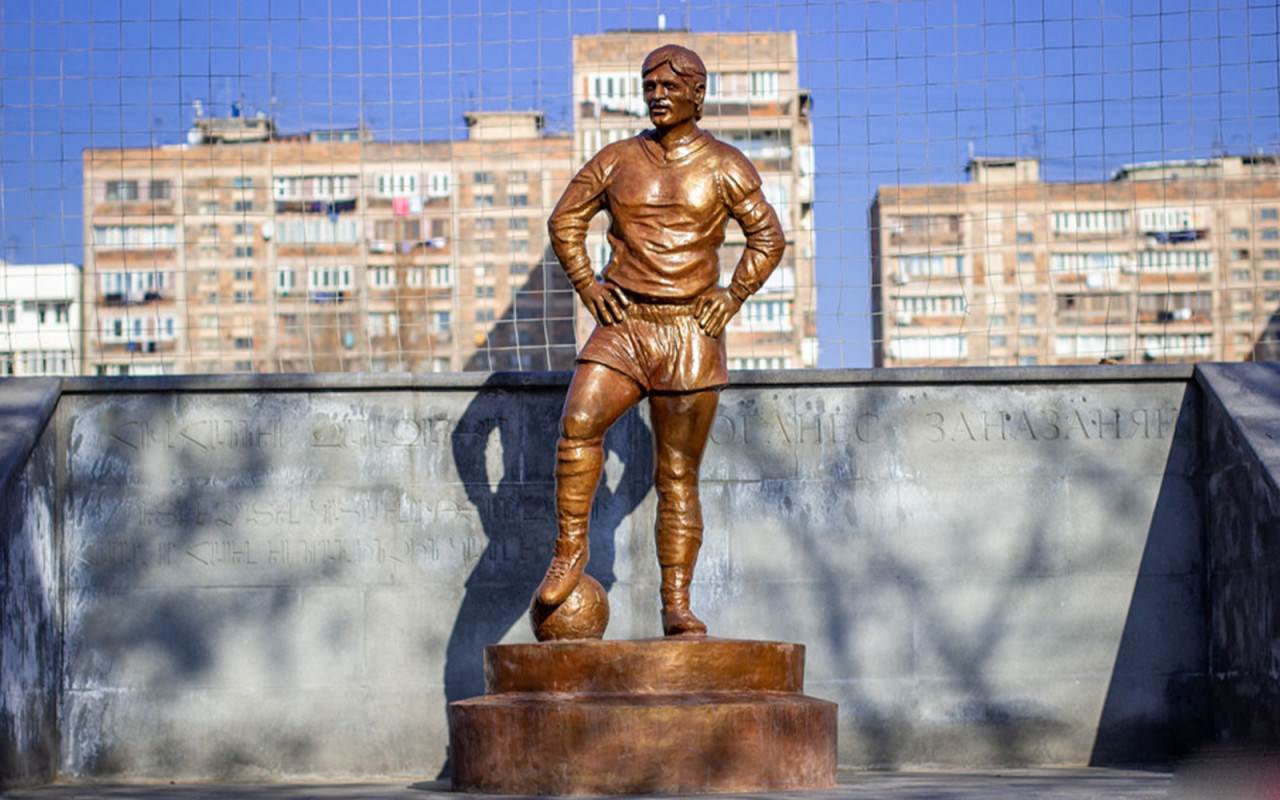 The statue of Hovhannes Zanazanyan in FC Urartu

On September 7, 2021, the opening ceremony of statuary was held at the training ground of Urartu FC, where the statues of Hovhannes Zanazanyan and Arkadi Andriasyan were unveiled along with the busts of the founder-director of the Republican Football School, Edvard Grigoryan, and a hero of the 44-day Artsakh war and a long-time employee of Urartu FC Simon Israyelyan. Together, Zanazanyan and Andriasyan, holding a ball in one hand and the USSR Cup in the other, are standing shoulder to shoulder and preaching that we will always have victories if we are hard-working and united. 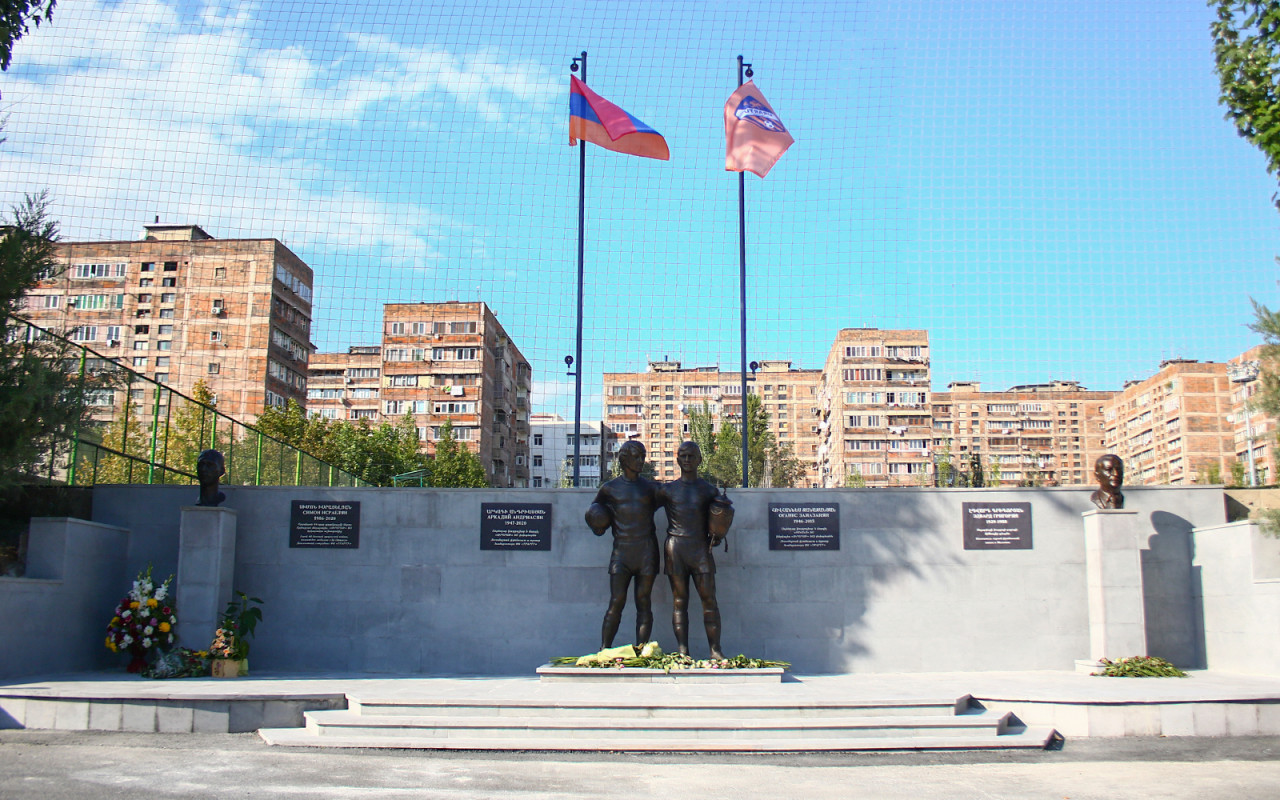 The birthday of Hovhannes Zanazanyan, December 10, and the day of his death, October 4, are important dates for the teams of the Urartu FC academy. 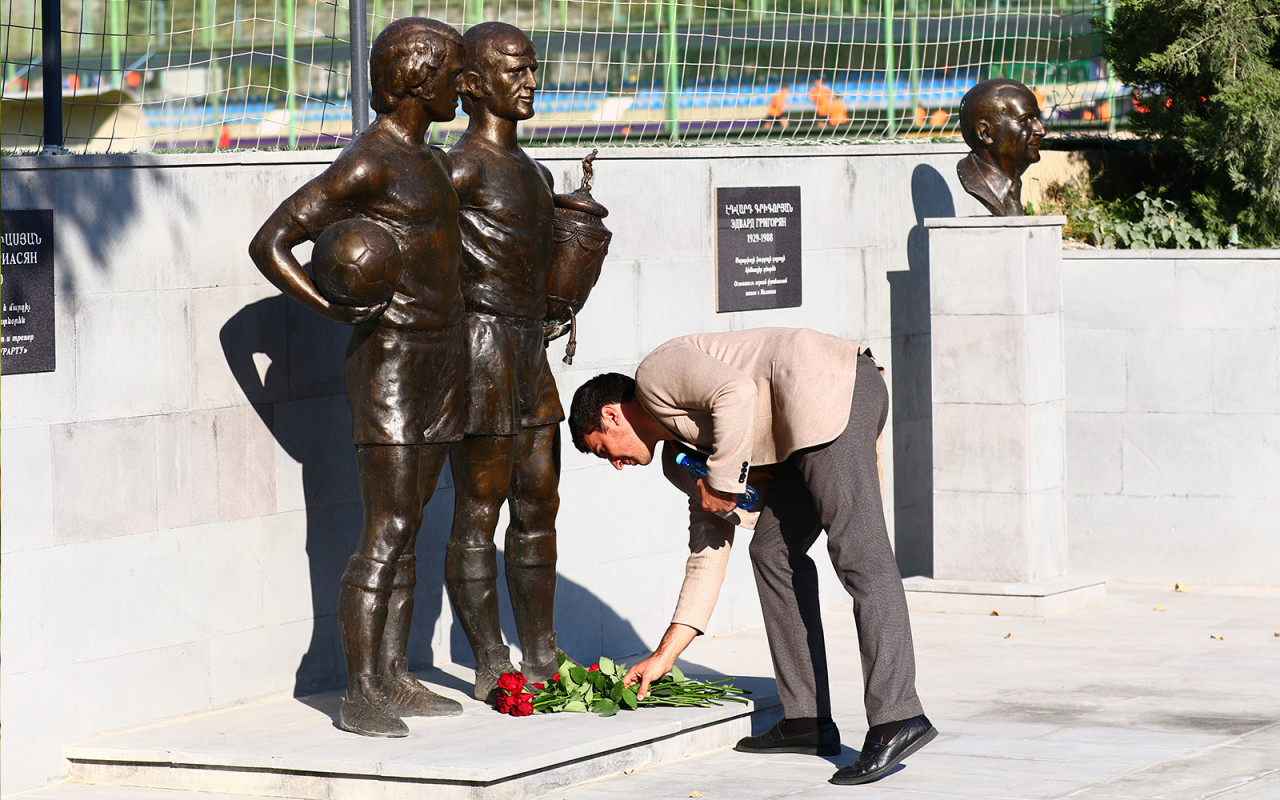 On those days, the young players, together with the club's managing staff, lay flowers at the statue of the famous player.